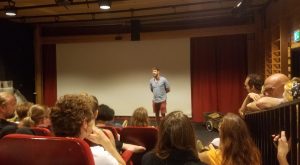 Even for those of us who are not a cinephiles, seeing a new movie can be a unique human experience. Especially when we have the chance to see an Ingmar Bergman film on the island where the movie was shot fifty-two years ago. Add to that eighty NSU attendees from all walks of life sitting in a hall meant for sixty (with emergency exits open for safety purposes) to watch the full eighty-three minutes of “one of the most daring movies ever made”, and you have a real anthropological opportunity.

After eating the Maria cookies (which were Bergman’s favorite alongside sour milk), spectators filed into the cozy screening room and found their place in a chair, on the steps, or along the wall. The movie theatre itself had a personal connection for the center coordinator who explained that the very room in which we were about to watch “one of the 100 movies that shocked the world” used to be the gymnasium of his former school.

The reminiscent rafters of a school gym reminded the audience of the contrast between the provoking storyline of the two ‘persona’ and their physical environment. Somehow it seemed that everyone forgot for at least part of the movie that they were sitting in a slightly crowded room, sprawled on the side steps or standing along the wall. Some sat with their hands folded in front of their faces on the edge of their seats and some leaned back to take it all in. While the audience’s eyes were on the film, the eyes of the main character seemed to stare back. One of the most powerful (even if not the most provocative) moments was when Sister Alme first describes Elisabet as having “a face like a child, yet severe eyes”.

This was the beginning of many interpersonal and intra persona struggles displayed on screen and extended in a ripple through the audience with Elisabet’s extended gaze into the camera.